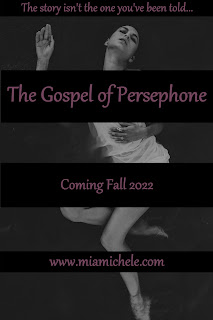 The Gospel of Persephone

The Great Mother divided herself to craft life from the void of Chaos.  She divided the world into the Overworld and the Underworld.  From her desire to see life flourish around the Mountain, she divided the Overworld into Sky and Sea, filling them and the land with creatures, large and small, giving life to Birth and Fire.  She created Night and Darkness, Day and Light.  And, finally, from the pride and affection she felt for her children, Love was born.

But her children were not created from that affection and, rather than care for one another, they fought one another for power.  Gaea’s heart turned from joy and pride to regret.  From her children came the sorrows of the world, and Gaea wept.  In her grief, her tears mixed with the dirt of the Overworld, birthing the mortals.  She breathed into them Sophia, her sacred wisdom, and their souls were tinged with their Divine Mother.

The immortals embraced the madness of their core and used their power to amuse themselves with the mortals so beloved by their mother, further breaking her heart.  Recognizing that even her faith could not save them, Gaea gave birth to her last child, a daughter of Earth whose birth spawned the Nymphs and divided the power of the Mountain into the demigoddesses of nature.  With her final act, Gaea breathed her last and slept, returning to Chaos.

In the absence of Gaea, the immortals took on flesh.  The gods of the Overworld, Sky (called Zeus) and Sea (called Poseidon) joined their brother, Hades, the King of the Underworld, to jointly rule, with Zeus set above as the ruler of all.  In order to create more gods, Zeus married his sister, Birth, whom he named Hera and christened the mother of all the living.  Although Poseidon desired Fire, his watery nature left him unable to tame his sister, and Hestia built her hearth at the border of her brother’s realm.  However, the King of the Underworld was alone; as his siblings created the gods and demigods of the Mountain, Hades longed for his sister, Demeter, to join him among the dead.  Yet the Queen of the Nymphs lived amongst the goddesses of nature, blessing the mortals of the Overworld with bountiful harvests in thanks for their devotions.

Hemera, goddess of Day, and Aether, the Light, bore the twins Helios and Selene, who ruled in the sky as sun and moon.  Nyx, goddess of Night, and Erebus, the Darkness, created the Fates, called the Moirai, who ruled the destinies of immortals and mortals alike: Clotho, who spun the thread of life; Lachesis, the allotter of days; and Atropos, the cutter of life’s thread.

Zeus sat on his throne on the Mountain, and from him was birthed the Pantheon:  Beauty, full of pleasure and passion in his daughter, Aphrodite; Wisdom in his daughter, Athena; Fertility in his son, Dionysus; and many more, both with Hera and with his many mistresses.  Selene bore him Pandeia, who gave him Artemis, his daughter-granddaughter; the nymph, Electra, bore his twin sons, Triptolemus and Iasion, demigods of nature.

For time without end, the immortals ruled and the mortals worshiped.  The gods grew in number, and their power seemed endless.  Liaisons created gods, demigods, and beloved mortals alike; wars were fought, and the Underworld grew with the dead.  Although Hades was surrounded with his dark siblings and his niece, Atropos, who desired him, he was consumed with Demeter, who lived with little concern for the desires of any man.

As Demeter turned the wheel of the year through spring alongside Eros as he pined for the maidens laboring in the field, she saw the young Iasion, planting alongside his twin brother, and her heart was pierced by Love’s arrow.  Their union produced twin sons, Plutus and Philomelus, giving the people their gods of the field.  With the blessing of Zeus, Demeter married Iasion, and their marriage was a joyful one, producing within the next year another son, Corybus, god of happiness and dance, before finally a daughter, Persephone.  Demeter’s heart was content.

Yet, from that joy was birthed the Erinyes, born from a hateful affair between Hades and Nyx: Alecto, endless fury; Megaera, jealous rage; and Tisiphonne, vengeful destruction.  Just as Demeter’s heart was light, so the heart of Hades was heavy with envy and anger.  From him came the destruction of all Gaea had once longed for when she created the gods from nothingness.

Consumed with his need for more power than his status as god of the dead claimed, Hades demanded that Demeter renounce Iasion and become his bride instead.  When she refused, he secretly planned his retaliation, and (at the wedding feast of the king of Thebes to the demigoddess, Harmony) Hades held the ear of his brother, Zeus.  After Demeter and her husband slipped away into the fields to ensure a bountiful harvest for the people of Thebes in honor of their king’s marriage, Hades unleashed his madness by convincing his brother that Zeus’s son had dishonored him by leaving the wedding feast for a tryst with a mortal.  When Iasion returned, covered in dirt from his work, his drunken father shot a lightning bolt, striking the young god’s heart and killing him instantly.

Shattered by his death, Demeter pounced on Hades in battle.  Her heartbreak, however, was no match for his vengeance, and it soon became clear that her defeat was imminent.  Her twin sons and their younger brother held the broken body of their father while Harmony cradled the infant Persephone, and Demeter’s love for all that she had lost at the hands of Hades overshadowed her desire to destroy him.  Like Gaea before her, she offered herself up to the Mountain.

Delving her hands into the soil of the Underworld, she pulled the magic of nature from there, creating a barren and empty tomb for Hades to rule, free of trees and wind and growth.  Thrusting her arms to the sky, she gave the seasons of herself- the hope of spring, the fertility of summer, the harvest of fall, and the bitterness of winter- to the mortals before falling into a deathlike sleep.  Unable to be woken by even Zeus, her body was moved to the tomb of Gaea, deep within the Mountain.

Realizing that the baby Queen of the Nymphs would be Hades’ new obsession, Artemis used the funeral of Demeter as a distraction and fled with the newborn.  Far from Thebes, in the mountainous peninsulas south of Macedonia, she found refuge among sheepherders in the peaks of Athos.  At her presence, the men of the mountain immediately consecrated themselves to the goddess in their midst, vowing themselves to her service.

With Persephone’s life hanging in the balance of her choices, Artemis gave the baby a sacred pomegranate seed and a deep sleep descended over the child.  The infant was wrapped in the goddess’s mantle and placed inside a small cradle, carved into the side of the mountain.  The garden in which Artemis hid the sleeping queen became known as a haven for those needing to be saved; in deference to their new patroness, the land was made off limits to all others.  After offering the newly ordained priests her devotion for their service, the goddess journeyed back to the Mountain for the conclusion of the funeral.  Helios noted her leaving and return; however, Persephone wasn’t missed until Hades sought out the child in her bassinet.

Hades turned his ire on his fellow gods, questioning who would dare steal his future queen.  He pledged to search the ends of the earth to find Persephone with the promise of returning her to the Underworld as his mate.